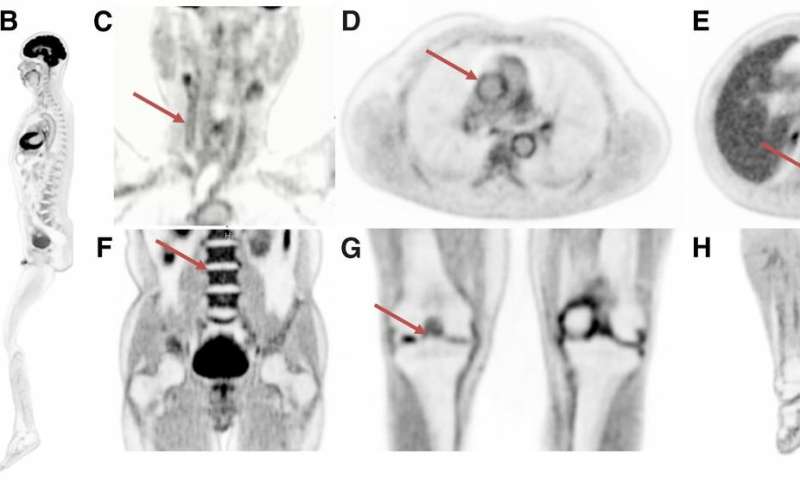 Case studies from the first total-body positron emission tomography/computed tomography (PET/CT) scanner reveal multiple benefits of the novel imaging technology, providing a solid groundwork upon which to build its clinical utility. Published in the March issue of The Journal of Nuclear Medicine, the case studies showed enhanced image quality, reduced scan time, a longer time window to perform the scan, reduced dose and total-body dynamic imaging. In a “Discussions with Leaders” column published in the same issue, Simon Cherry elaborates on how this new technology came about.

The total-body PET/CT scanner encompasses the entire body within its field of view and allows imaging of all the tissues and organs of the body simultaneously. The first total-body scanner was constructed by the EXPLORER Consortium, a group including teams from the University of California, Davis, and the University of Pennsylvania, as well as industry partners.

“Building a total-body PET/CT scanner started off as a challenging technical idea,” said Simon R. Cherry, Ph.D., co-leader of the EXPLORER Consortium and distinguished professor of biomedical engineering at the University of California, Davis. “But very quickly we identified a range of research areas where we thought this could be hugely impactful, for example, by creating the ability to look kinetically and simultaneously at new drugs and tracers in all the tissues of the body to enable measurement of whole-body pharmacokinetics of labeled drugs and probes. We also thought we could potentially extend some of the successes we have had with PET in oncology to other systemic diseases, such as inflammation and infection.”

The EXPLORER human scanner was completed in May 2018, and the first human studies were performed in collaboration with Zhongshan Hospital in Shanghai, China, in September 2018. To explore the dynamic range of the scanner, four subjects were injected with a range of doses of 18F-FDG, and scans were acquired at a range of time intervals after injection.

In the first case study, the subject was injected with 290 MBq of 18F-FDG and, 82 minutes after the injection, received a 20-minute list-mode scan. Upon data reconstruction, images showed high count-density which allowed for the visualization of small range features without the drawback of high image noise. In addition, images from the scan were compared at 20 minutes, 10 minutes, 5 minutes, 2.5 minutes, 75 seconds, 37.5 seconds and 18.75 seconds. Scan images at 37.5 seconds were of diagnostic quality, and even scans at 18.75 seconds were of arguable diagnostic quality, indicating a possible reduced scan time with total-body PET.

The second case study assessed the impact of delayed imaging with total-body PET. This subject received total-body PET scanning one, three, eight and 10 hours after injection with 18F-FDG. At each of the time points, the scan duration was 14 minutes. While the amount of injected activity decreased over the 10 hours, images still appeared to be of diagnostic quality. Additional data from these scans were acquired in list-mode as the subject was injected with the tracer and then subsequently for the next hour. Data were segmented into one second intervals, then compared over a two-minute time frame, resulting in dynamic whole-body images with high temporal resolution.

In the next case study, the total-body scanner’s ability to image a single organ—in this instance, the brain—was assessed. The subject in this study received 80 MBq of 18F-FDG and was scanned for 25 minutes starting at 25 minutes after the injection. Images showed excellent delineation of smaller structures of the brain and very-high-resolution reconstruction without high image noise, even at this low injected dose.

The final subject received 25 MBq of 18F-FDG and was scanned for 10 minutes at 50 minutes after the injection. Results from this scan show good quality images were achieved even with a reduced dose.

“Now that the total-body PET scanner can make its way into the clinical arena, it will be interesting to see how nuclear medicine and molecular imaging professionals utilize it,” said Cherry. “Will they use the tool to enable a quicker clinical workflow now that they can achieve the same quality images in 30-60 seconds as compared to 20 minutes? Will they fully exploit the sensitivity of the scanner and conduct 10-15 minute scans to obtain extremely high quality images?”

Cherry spoke further on the logistics of implementing the total-body PET scanner into the hospital setting. “Initially, I imagine the system will be adopted only at high-volume sites. These centers may need more uptakes rooms; however, there are so many variables that we will not know the requirements until we get some clinical experience. For example, we do not know whether we might modify the uptake time, either to shorten (because we will not need to wait so long because of much improved image quality) or even lengthen uptake times. You could bring a patient back in three or four hours after injection and the image contrast would be absolutely amazing.” Space for the actual scanner would not be a major issue, according to Cherry.