The family of an entrepreneur with terminal brain cancer claim the NHS is ‘inhumane’ for not giving him cannabis oil to reduce side effects of his cancer treatment.

George Gannon, 29, flew back to the UK from his home of four years in Koh Phangang, Thailand, after being diagnosed with a frontal lobe malignant tumour in October.

The social media consultant and DJ was told that his cancer was terminal in December 2018.

In palliative care, Mr Gannon is taking cancer drugs including steroids, which give him severe side effects which he says are alleviated by cannabis oil.

He and his girlfriend, Canadian-born Natalie Hobbs, 29, currently have to buy it online for £1,200 a month and claim the NHS have been dismissive. 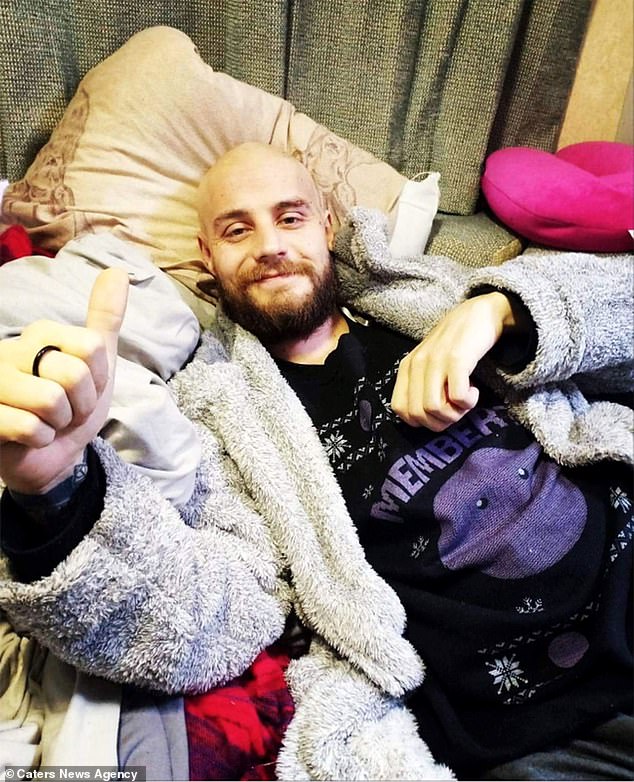 The family of George Gannon, 29, claim the ‘inhumane’ NHS is denying him access to ‘life-saving’ cannabis oil which he claims alleviates his medication side effects 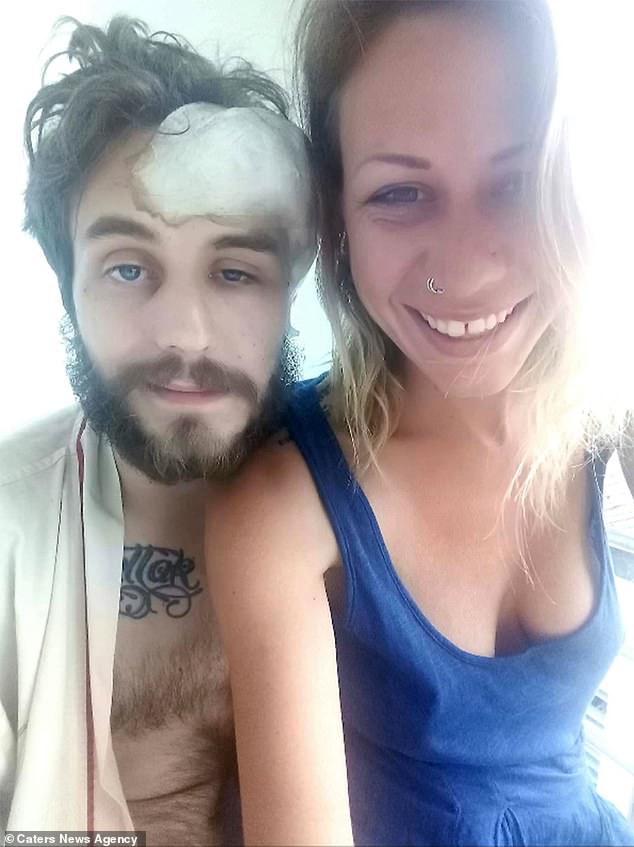 Mr Gannon flew back to UK from his home of four years in Koh Phangang, Thailand, where he had been diagnosed with a frontal lobe malignant tumour in October. Pictured with a bandage on his head after surgery in Thailand, beside his girlfriend, Natalie Hobbs, 29, who is currently caring for him 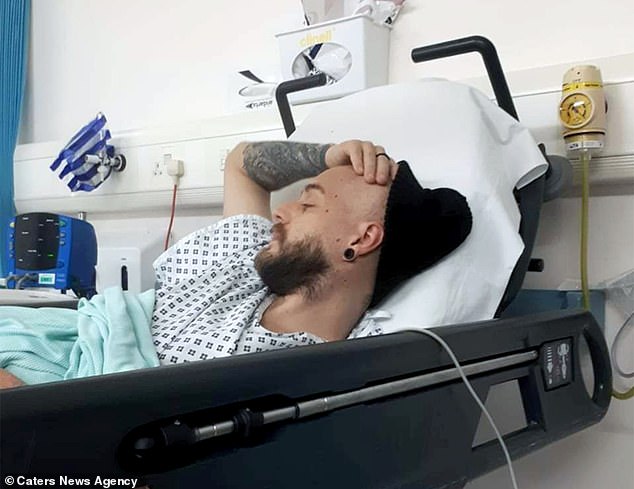 Mr Gannon, pictured in hospital in his home of Stone, Staffordshire, was given the news that he had 12 brain tumours and that his cancer was terminal in December 2018

Mr Gannon, originally from Basingstoke, Hampshire, but now living in Stone, Staffordshire said: ‘It’s unfortunate how difficult it has been to get this prescription from the NHS.

‘It’s hard for me to communicate my wishes to my doctors.

‘The people who need these oils most are often the people that can’t speak up for themselves.

‘The oil definitely helps with my symptoms, which is a tall order because I experience many side effects from my prescriptions even on the best of days.’

CBD oil is legal to buy and widely available but cannabis oil containing the psychoactive chemical THC is still illegal in the UK.

WHO CAN RECEIVE A PRESCRIPTION OF CANNABIS OIL ON THE NHS?

Very few people in England are likely to get a prescription for medical cannabis.

Currently, it is only likely to be prescribed for the following conditions:

It would only be considered when other treatments weren’t suitable or hadn’t helped.

Some cannabis-based products are available to buy over the internet without a prescription.

It’s likely most of these products – even those called ‘CBD oils’ – will be illegal to possess or supply and there’s a good chance they will contain THC – the chemical which makes you high.

The risks of using cannabis products containing THC (the chemical that gets you high) are not currently clear. That’s why clinical trials are needed before they can be used.

You cannot get cannabis-based medicine from your GP – it can only be prescribed by a specialist hospital doctor.

At the end of 2018, Mr Gannon was due to have immunotherapy to boost his body’s natural defences against the cancer.

He had one round, but then his condition became worse and he was told the cancer was terminal.

This meant the only treatment he was able to have is growth-blocking drugs debrafinib and tremetinib, and a steroid called dexamethasone.

His medication causes him a host of aggressive side effects, with debrafinib known to cause fatigue, sickness, diarrhoea and anaemia.

Mr Gannon and his family say the drugs have only made his condition worse, and if he can have access to cannabis oil, he could gain strength to have ‘life-saving’  immunotherapy.

Only specialist doctors can prescribe the oils and there are strict criteria for who can have it – namely people with rare forms of epilepsy, with muscle stiffness because of multiple sclerosis, or vomiting because of chemotherapy.

Patients will usually be required to have exhausted other potential treatments before being considered for cannabis.

There is some evidence medical cannabis can help certain types of pain, though it is not yet strong enough to recommend it for pain relief, according to the NHS.

According to Macmillan Cancer Support, there is no solid evidence to prove cannabis oil can improve cancer treatment.

Mr Gannon’s relatives claim doctors are ignoring their request for him to access the cannabis oil – which they say reduces his grogginess.

Mr Gannon’s girlfriend, Ms Hobbs, said: ‘I think the NHS is being inhumane in denying him access to the oil.

‘We’re professional people, not a pair of stoned hippies, and this oil has made a huge difference to George. 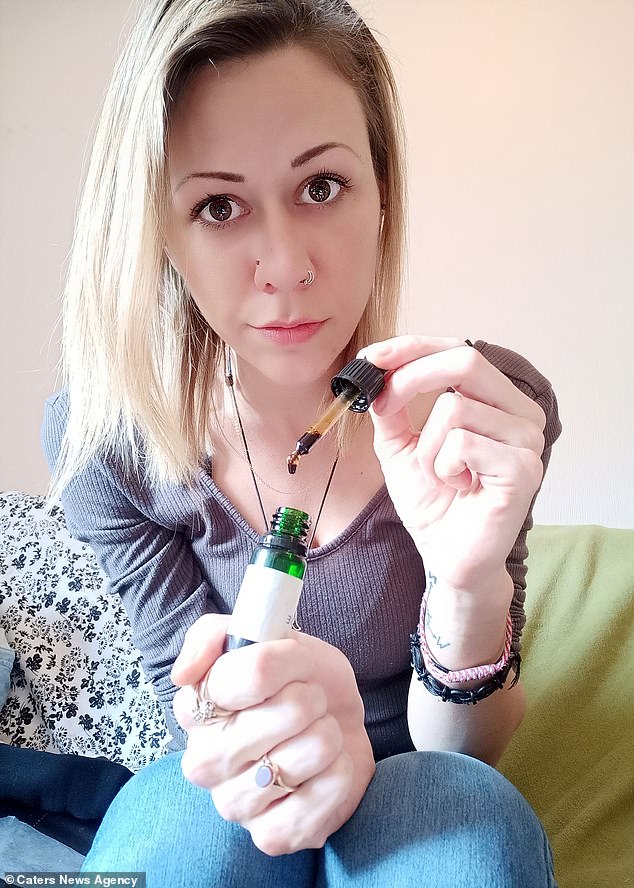 Mr Gannon and Ms Hobbs have been buying cannabis oil online for £1,200 a month 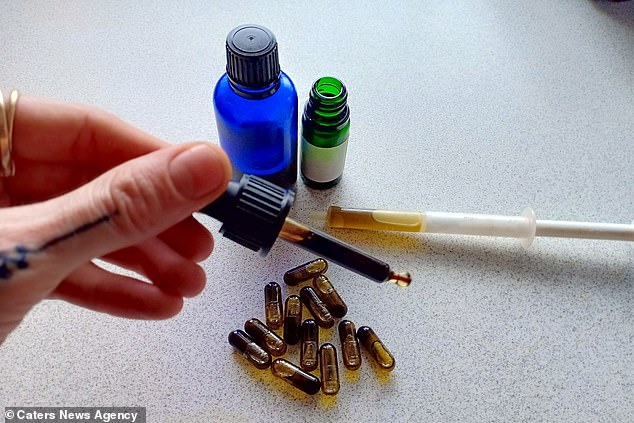 Mr Gannon said: ‘The oil definitely helps with my symptoms, which is a tall order because I experience many side effects from my prescriptions even on the best of days’ 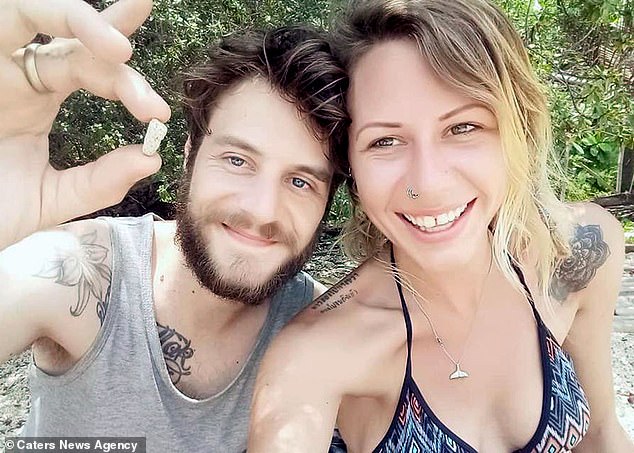 ‘We’re not naive and don’t think that it’ll cure everything but I do think it could mitigate some of the symptoms.

‘We see immediate benefits from the oils but also long term benefits. Within the last two weeks he’s regained some movement.’

Ms Hobbs, who currently cares for Mr Gannon, said staff at Royal Stoke University Hospital in Stoke-on-Trent, where Mr Gannon has been treated, have been reluctant to back an application for him to use medical cannabis.

‘I appreciate that there are always people who require funding but if there’s a chance that the oil could help him then he shouldn’t be denied it.’

Ms Hobbs is frustrated that there is a ‘stigma’ around cannabis oil.

She said: ‘I can’t tell how much he’s improved since he’s started taking the oil, it’s like he’s his old self.

‘If he can get off the steroids then he could have immunotherapy and that could save him.

‘No one in the hospital has given us any info on how to apply, the GP said he was going to give us some literature on the oil but nothing has arrived, they’ve been quite dismissive about the idea.’ 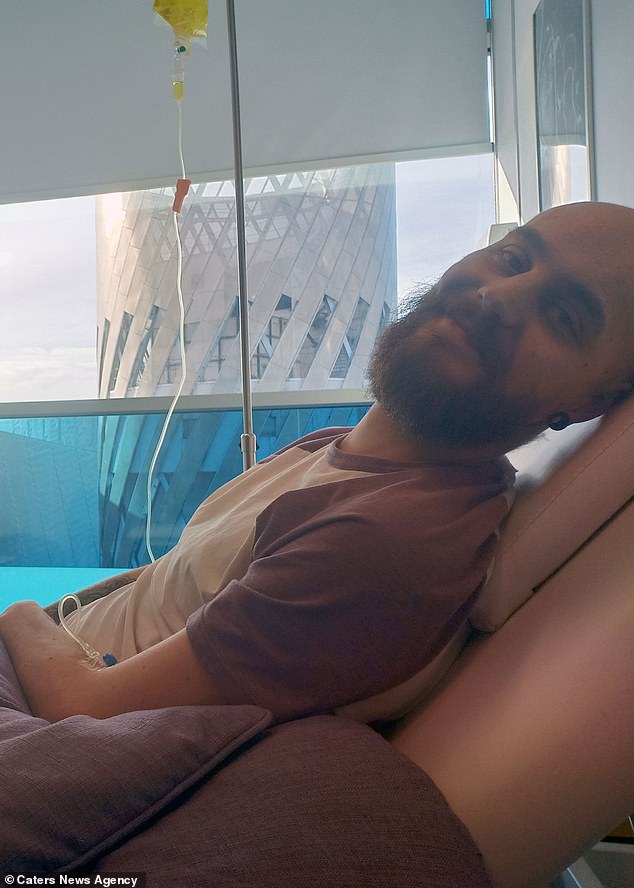 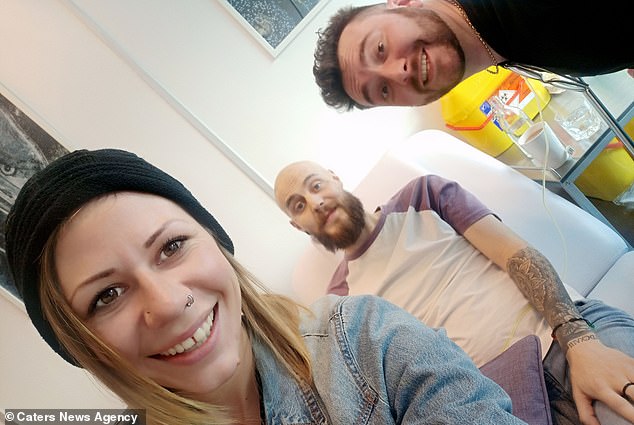 Ms Hobbs and Mr Gannon, pictured in hospital with a friend, said they are ‘not hippies’ but the NHS have been dismissive of their pleas 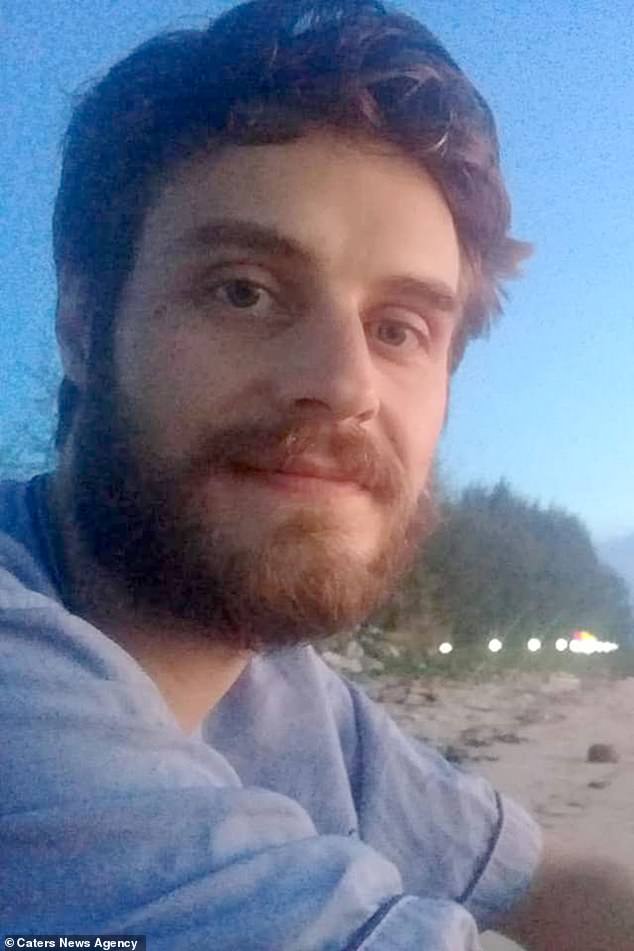 Mr Gannon, a social media consultant and DJ, is said to have had skin cancer in 2013 before moving to Thailand

She said: ‘The prescription would take the stress off us. We’re not asking for handouts, George needs help.

‘I think there’s always hope, we won’t take no for an answer, there are always options but we’re running out of time.’

On the GoFundMe page, Ms Hobbs recalls the first signs of Mr Gannon’s brain cancer while they were ‘living their dreams’ on Thailand’s islands.

Mr Gannon was rushed to a local hospital on a motorbike when he woke up in the night covered in sweat and ‘unable to process his own thoughts in to words or make sense of anything that was happening to him’.

Ms Hobbs said: ‘What happened in those next few hours, I couldn’t tell you, but the fear, sadness and heartbreak took over when we learned that George had several tumours in his brain.’ 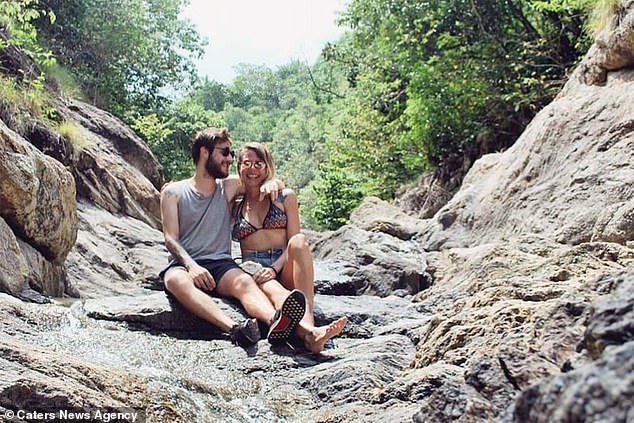 The couple are trying to raise $25,000 Canadian dollars to pay for the cannabis oil

Doctors believe Mr Gannon’s tumour could have been a reoccurrence of a skin cancer he battled in 2013 before moving to Thailand.

He paid £3,500 for a major operation to remove the tumour at a hospital in Koh Samui, before fundraising £100,000 for a ‘medically-assisted flight’ back to the UK.

Once back in the UK, George underwent a second biopsy surgery as well as ten rounds of full-head radiotherapy and one round of immunotherapy.

But on December 20, 2018, Mr Gannon was given the heartbreaking news that his cancer was terminal and he would be referred for end-of-life-care.

A University Hospitals of North Midlands NHS Trust spokesperson said: ‘Medicinal cannabis would only be prescribed when there is clear published evidence of benefit for patients and where there is a clinical need which cannot be met by a licensed medicine.’

IS MEDICAL CANNABIS LEGAL IN THE UK?

Sajid Javid revealed laws were changing to allow cannabis-based products for medicinal use to be prescribed in England, Scotland and Wales.

The dramatic change to policy followed a review into medical cannabis after high profile cases of patients being denied products containing THC, the psychoactive compound that makes users ‘high’.

Epileptic boy Billy Caldwell was even banned from taking cannabis oil that was prescribed to him abroad.

He was given back the medicine after a high profile campaign spearheaded by his mother forced Mr Javid to grant a 20-day emergency licence for its use.

The Home Secretary has repeatedly insisted the change was not the first step towards the broader legalisation of cannabis.

Mr Javid announced on June 19 that the Misuse of Drugs Regulations act of 2001 was being reviewed in a two-part investigation to allow for the prescription of medicinal-cannabis products.