Ebola cases in the Democratic Republic of Congo epidemic may be 33% HIGHER than official figures because people avoid treatment centres, expert claims

The number of Ebola cases in the Democratic Republic of the Congo may be a third higher than figures show, experts have warned.

A World Health Organization director of health emergencies said aid workers may be missing up to a quarter of cases because people are refusing treatment.

The outbreak has now been going on for around 10 months and is getting worse – week-by-week infection rates are far higher than at any time before March. 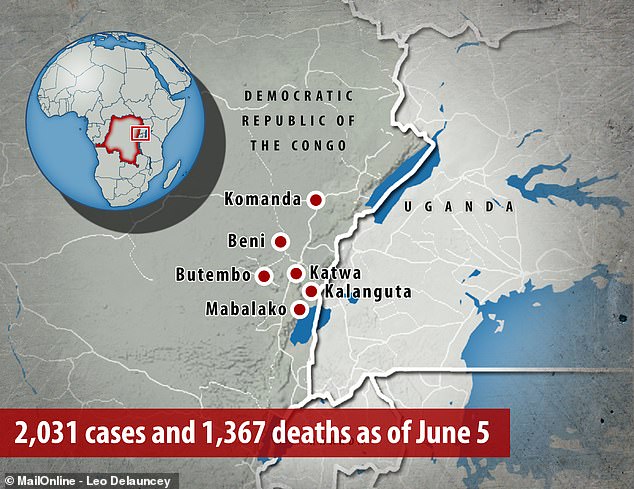 As of Wednesday this week, 1,367 people had died in the ongoing Ebola epidemic in the Democratic Republic of Congo but the World Health Organization warns up to a quarter of cases may be missing from the official toll

‘We may be missing up to a quarter of cases.’

The WHO warns around 10 per cent of people are refusing to get vaccinated against Ebola.

A new vaccine is being rolled out for the first time in this outbreak and is proving to be very effective, but many locals remain angry at or afraid of health workers.

It is this unvaccinated population where most new Ebola cases are coming from, and the same people who are most at risk of spreading the deadly virus.

Dr Ryan added: ‘If someone dies in the community it’s a disaster.

The British Red Cross this week called for more funding for the Ebola response in the Democratic Republic of Congo and urged the public to donate money.

The latest outbreak began in North Kivu province in August last year and almost 1,400 people have died since.

The outbreak is the worst in the DRC’s history and the second worst in world history.

Red Cross workers are already in the area trying to encourage people to seek and accept medical help, and have a database of rumours spreading among local people which they need to tackle.

‘They have done incredible, brave work – but without funding, the response could stall, and the risk of further spread is a terrifying reality.’

The British Red Cross appeal will support the urgent containment of the disease, including safe and dignified burials, Ebola prevention and control, and work with communities.

More than 130,000 people have been vaccinated to date, Congolese figures show, and Dr Ryan said the epidemic is ‘not out of control, but… certainly not under control’.

A third of confirmed Ebola deaths are being recorded in people who died without ever going to a treatment centre, the WHO said.

These are a huge risk for spreading the disease because they are likely to have stayed at home and been in close proximity with unprotected relatives and neighbours.

And the disease can still spread after death, a worrying fact for a culture which traditionally holds open casket funerals and buries its own dead.

In both of the past two weeks, 88 people have been infected in seven days – a slight drop from the 112 per week average in the first three weeks of May.

But in January and February this average was just 31.8 people per week.

Attacks from armed rebels – some believed to be linked to Islamic State – are slowing down the medical response and risking the lives of locals and aid workers.

A local government official and 13 civilians were killed in an attack on Monday, and health workers have threatened to pack up and leave if they’re not better protected. 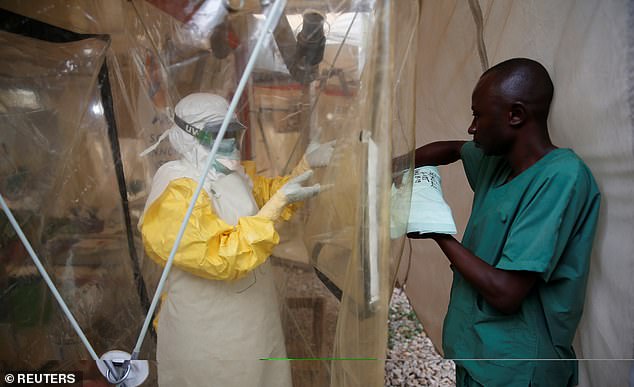 The World Health Organization’s Dr Mike Ryan said the outbreak is ‘not out of control but… certainly not under control’. Pictured, Health workers at an emergency unit in the city of Beni 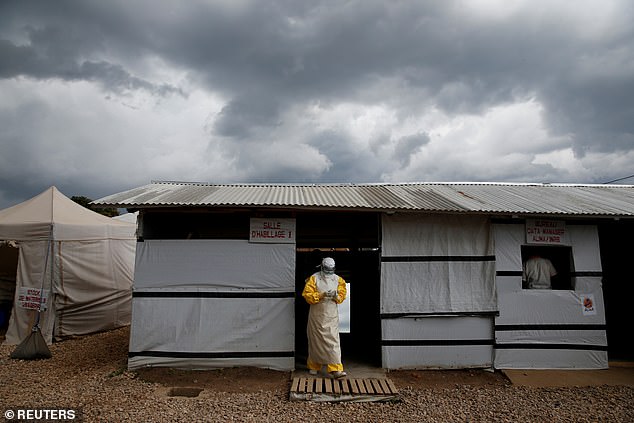 Around a third of people who have died in the Ebola outbreak never went to a treatment centre, according to the WHO

Last month, a global health expert at Public Health England told MailOnline the epidemic could blow up to proportions seen in the 2014 outbreak in West Africa, which killed more than 11,000 people, if security doesn’t improve.

Dr Osman Dar said: ‘We need to massively ramp up efforts to improve the safety of health workers.

‘At the moment they’re quite confident they have [the outbreak] contained, but the longer it goes on, the greater chance there is of it spreading to a major urban setting or across a border.’

WHAT IS EBOLA AND HOW DEADLY IS IT?

Ebola, a haemorrhagic fever, killed at least 11,000 across the world after it decimated West Africa and spread rapidly over the space of two years.

That epidemic was officially declared over back in January 2016, when Liberia was announced to be Ebola-free by the WHO.

The country, rocked by back-to-back civil wars that ended in 2003, was hit the hardest by the fever, with 40 per cent of the deaths having occurred there.

Sierra Leone reported the highest number of Ebola cases, with nearly of all those infected having been residents of the nation.

WHERE DID IT BEGIN?

An analysis, published in the New England Journal of Medicine, found the outbreak began in Guinea – which neighbours Liberia and Sierra Leone.

A team of international researchers were able to trace the epidemic back to a two-year-old boy in Meliandou – about 400 miles (650km) from the capital, Conakry.

Emile Ouamouno, known more commonly as Patient Zero, may have contracted the deadly virus by playing with bats in a hollow tree, a study suggested.

HOW MANY PEOPLE WERE STRUCK DOWN?

Figures show nearly 29,000 people were infected from Ebola – meaning the virus killed around 40 per cent of those it struck.

Cases and deaths were also reported in Nigeria, Mali and the US – but on a much smaller scale, with 15 fatalities between the three nations.

Health officials in Guinea reported a mysterious bug in the south-eastern regions of the country before the WHO confirmed it was Ebola.

Ebola was first identified by scientists in 1976, but the most recent outbreak dwarfed all other ones recorded in history, figures show.

HOW DID HUMANS CONTRACT THE VIRUS?

Scientists believe Ebola is most often passed to humans by fruit bats, but antelope, porcupines, gorillas and chimpanzees could also be to blame.

It can be transmitted between humans through blood, secretions and other bodily fluids of people – and surfaces – that have been infected.

IS THERE A TREATMENT?

The WHO warns that there is ‘no proven treatment’ for Ebola – but dozens of drugs and jabs are being tested in case of a similarly devastating outbreak.

Hope exists though, after an experimental vaccine, called rVSV-ZEBOV, protected nearly 6,000 people. The results were published in The Lancet journal.