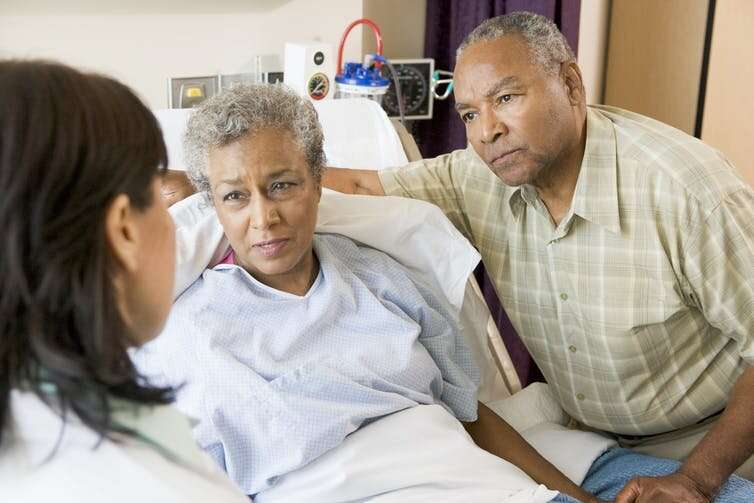 Every day, in every hospital, doctors and nurses respond to “code blue” situations. This is an emergency alert for when a patient’s heart stops beating, called a cardiac arrest.

To save the patient’s life, medical and nursing staff will often administer cardiopulmonary resuscitation (CPR). CPR involves repeated chest compressions, artificial breathing, use of medications and an electric shock to jump-start the heart (defibrillation).

The aim is to restore a person’s heartbeat and blood pressure to normal, and in turn to restore life. CPR must be initiated quickly as brain cells rapidly die without blood and oxygen.

Patients admitted to hospital are often surprised when their doctors ask: “If your heart were to stop beating, would you want CPR or not?” But in every code blue doctors need answers to the same two questions. First, whether the clinical team considers CPR would be an effective treatment; and second, whether the patient wants CPR.

If a person has a cardiac arrest outside hospital, it is usual, and expected, that bystanders begin CPR, use a defibrillator if available, and call an ambulance.

CPR is taught in first aid courses and defibrillators are widely available in public places such as airports and sports grounds. Time is of the essence, so having trained community members is important.

In a hospital setting, though, the decision to administer CPR is more nuanced. It’s built on a discussion around the patient’s medical condition and, importantly, takes into account their wishes.

Clinicians in Australia have provided examples of some different perspectives on this discussion:

“Some of [the patients’ relatives] are absolutely aghast that we might even suggest not to resuscitate […] they bring their loved one into hospital to get better.”

A bit of background

CPR was developed and initially applied to resuscitate people with specific medical conditions such as an acute myocardial infarction (a heart attack).

When a cardiac arrest occurs because of a heart attack or other heart condition, there’s a reasonable chance CPR will re-start the heart and save the person’s life. A recent Australian study looking at people who had a cardiac arrest in hospital showed 41.5% of people who were admitted due to heart problems survived with good neurological function.

Expanding the use of CPR more broadly to every disease that causes the heart to stop beating seems like common sense. But this is not necessarily the case.

For older hospitalized patients (aged over 67 years in this research) with chronic diseases—such as heart failure, kidney disease, cancer or diabetes—their chance of surviving a cardiac arrest and leaving the hospital alive is around 11-15%. Chances of survival are slightly better in older patients without a chronic illness (17%).

For patients in the late stage of their life, due to advanced illness or severe frailty, their chance of survival is almost zero.

CPR is not always an appropriate treatment. The decision to perform it needs to be made carefully, especially when it’s highly unlikely to restore a patient’s heartbeat.

Unlike the popular media portrayal of CPR, not every survivor of cardiac arrest returns to their previous level of functioning.

CPR may revive a heart that has stopped beating, but it doesn’t always restore a person back to a life they had or want. It may also do harm by reviving a person who does not want to continue living and would have preferred their disease to follow its natural course. When CPR is performed on a patient who doesn’t want it, it disrupts a gentler dying process, transforming it into an impersonal medical event.

When a cardiac arrest happens, there’s no opportunity to ask the patient what they want at that time. In hospital, it’s routine to provide CPR for patients in cardiac arrest unless there is a medical order to withhold it, or if the patient has completed an advance care directive refusing CPR. This is often referred to as a “do not rescusitate” order.

Avoiding harm from inappropriate or unwanted CPR requires planning ahead and being prepared to have a difficult conversation.

We have launched an animated film, The Inappropriate Question, to help people better understand why these conversations are important.

Discussing CPR is upsetting for some patients, because raising the possibility of death is confronting. It’s also harder to discuss this when a person has just been admitted to hospital for treatment and is expecting to recover.

CPR is an important treatment. When used appropriately, it saves lives. But when applied injudiciously it can cause distress and avoidable harm.