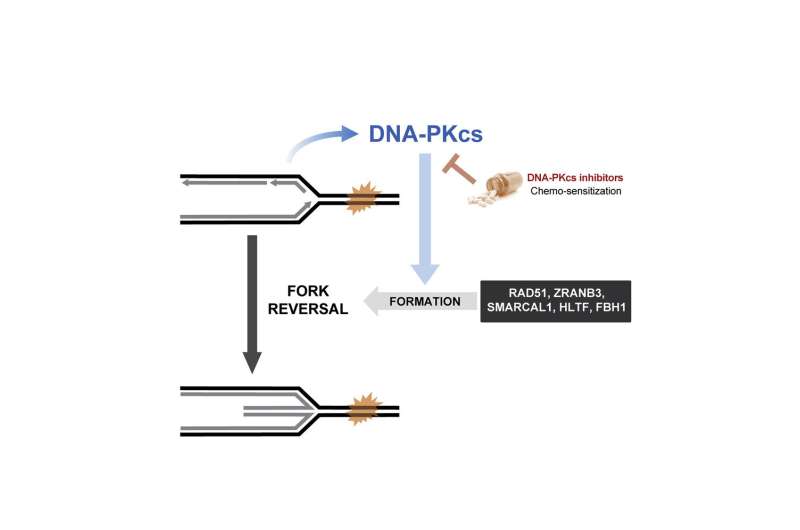 Researchers have uncovered a novel pathway that explains how cancer cells become resistant to chemotherapies, which in turn offers a potential solution for preventing chemo-resistance.

Experimental DNA fibers with fluorescence were used to reveal the speed of DNA replication forks.

The research describes for the first time how a type of enzyme—previously known for its roles in DNA repair—prevents DNA damage in cancer cells, making them tolerant to chemotherapy drugs.

“It provides us tools to manipulate and then break chemo-resistance in cancer cells,” said Marcus Smolka, interim director of the Weill Institute for Cell and Molecular Biology and professor of molecular biology and genetics in the College of Agriculture and Life Sciences. Diego Dibitetto, a former postdoctoral researcher in Smolka’s lab who is currently at the University of Bern in Switzerland, is the paper’s first author.

Many anti-cancer drugs work by creating blocks on the DNA of cancer cells as they replicate. During replication, DNA strands entwined in a double helix separate into two individual strands so each strand can be copied, eventually leading to two new double helixes. The junction where this separation and copying occurs is called a replication fork, which unzips down the double helix.

If these replication forks were cars on a road, chemotherapy drugs can be imagined as obstacles that interfere with the flow of the cars, thus stopping replication and breaking DNA. But cancer cells have a way of slowing down these forks, which allows them to avoid such collisions and protect their DNA, leading to drug tolerance.

This study reports, for the first time, how a kinase (enzyme) called DNA-PKcs acts as a sensor when a fork is stressed due to blocks, and promotes slowing of the fork and chemo-resistance.

DNA-PKcs has been known for its role in DNA repair related to immune system antibody generation and resistance to radiation. But this is the first time the kinase has been associated with slowing a replication fork, a process called fork reversal.

“It’s a completely new way of thinking about the action of this kinase” Smolka said. “It’s not repairing DNA in this case; it’s slowing down forks to prevent breaks from happening in the first place.”

The results open the door to new cancer treatments, as DNA-PKcs inhibitors already exist and are being used for clinical trials in tandem with radiation therapies. In those treatments, radiation damages cancer cell DNA, and the thought was that inhibiting DNA-PKcs would limit cell repair. But, DNA-PKcs inhibitors don’t work well in that context, as cancer cells have other ways to repair themselves.

This study provides early proof that a DNA-PKcs inhibitor could be effective in combination with chemotherapies, where chemotherapy drugs would create blocks to DNA replication, and the inhibitor would prevent the slowing of the replication forks that leads to chemo-resistance.

In the study, the researchers used an assay to detect the DNA-PKcs kinase at replication forks. Then they used a DNA fiber assay with fluorescent colors, such that the faster the replication forks moved, the longer the fibers became. In the presence of chemotherapy drugs, the fibers were short, pointing to slowed replication forks. But when inhibitors were added in, the fibers remained longer, indicating the forks were moving at faster speeds.

Co-author Massimo Lopes, an expert in replication stress at the University of Zurich, took images that confirmed that the replication forks were no longer reversing and slowing down in the presence of the kinase inhibitors. The team also proved that cancer cells became sick or degraded when chemotherapy and inhibitors were applied together.

“This is another way to confirm that being able to prevent slowing and fork reversal through DNA-PKcs inhibitors seems to be a really good way of manipulating chemo-resistance,” Smolka said.

In future work, the research team will investigate how cells sense replication fork stress and what proteins DNA-PKcs interact with to slow these forks.