Symptomatic cases of Covid appear to be ebbing in the UK after a sustained wave. The curvature may be heading in the right direction but over 100,000 new cases a day are still being recorded. With a wider pool of Britons once again coming down with symptomatic Covid, cases of long Covid are increasing. Now, a new US-based study has found a particular symptom is stubbornly persisting more than others.

A new study, published in Brain, Behavior & Immunity – Health, examined lingering symptoms among 200 COVID-19 patients about 125 days after testing positive for the virus.

All patients were enrolled in the college’s COVID-19 Neurological and Molecular Prospective Cohort Study in Georgia which was developed in early 2020 to study the severity and longevity of neurological problems reported by those infected with the virus.

The majority of the study’s early enrollees were women, with only 35.5 percent being men. The average age of a study participant was 44.6 years old and nearly 40 percent were Black.

The demographics, self-reported symptoms, comorbidities (having more than disease or condition present), and quantitative measures of depression, anxiety, smell, taste, and cognition were analysed. 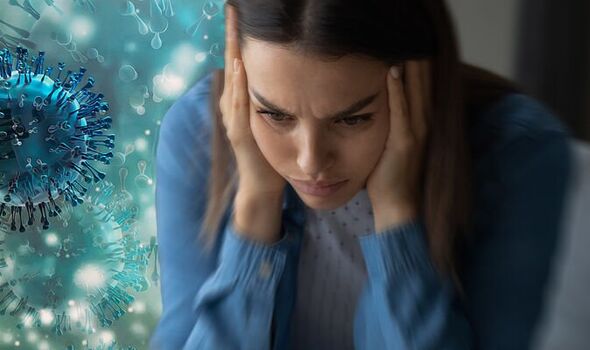 The researchers found fatigue was the most reported symptom in the study cohort, seen in 68.5 percent of participants.

Fatigue is a feeling of constant tiredness or weakness and can be physical, mental or a combination of both.

This was followed by headaches, which were reported in 66.5 percent of participants.

A little more than 54 percent reported changes in smell and taste while 47 percent met criteria for mild cognitive impairment.

Also, more than 20 percent of patients said that they experienced lingering confusion.

The researchers also found self-reported symptoms and comorbidities were associated with depression and anxiety.

Researchers noted in the study that patients most commonly reported having hypertension at the time they became infected with COVID-19.