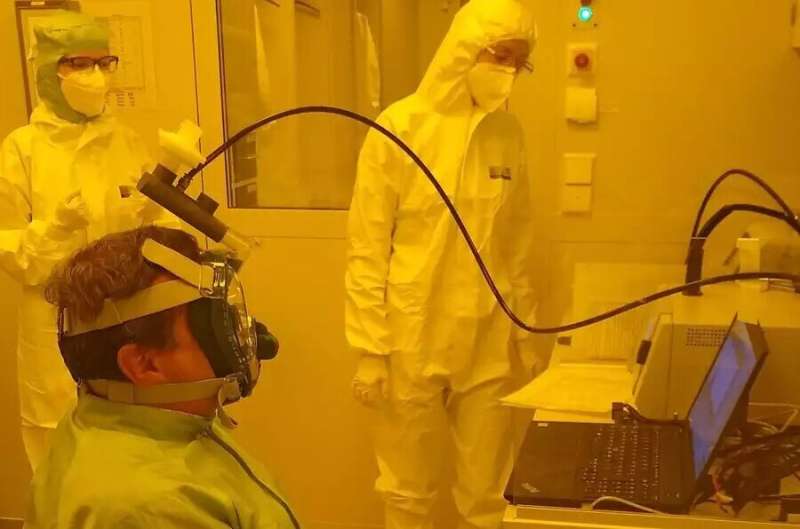 Children exhale significantly fewer potentially infectious particles than adults—at least this is true for the small respiratory droplets that are predominantly produced in the lungs. This is a key finding of a study conducted by the Max Planck Institutes for Dynamics and Self-Organization and for Chemistry in collaboration with the University Göttingen Medical Center.

The researchers investigated the concentrations of aerosol particles and droplets emitted with the breath when breathing, speaking, singing and shouting, using measurements on 132 people of all ages. The findings help to understand how the spread of diseases like influenza or COVID-19 can be contained.

Infectious diseases are often transmitted via particles exhaled from infected persons. Yet, the size of such aerosol particles varies greatly, depending on its origin in the respiratory tract. In the lung, mostly small particles with less than five microns—that is five thousandths of a millimeter—are produced, also known as PM5. In contrast, bigger particles are produced in the upper respiratory tract. As the measurements showed, children exhale far less smaller particles than adults.

“We found that the concentration of small particles below five microns increases with age and is particularly low in children. As a result, adults are much more likely to trigger spreading if the infection is only in the lower respiratory tract,” says Mohsen Bagheri, research group leader at the Max Planck Institute for Dynamics and Self-Organization.

Notably, larger particles that originate in the throat are spread by children and adults to the same extent, according to the study. The researchers did not find a correlation between the concentration of exhaled particles and the person’s gender, weight, fitness or smoking habits.

In this comprehensive study, the researchers recorded data from 132 healthy volunteers. The study also included children and adolescents between five and 18 years about which very little data were available. They used various instruments installed in a clean room to measure the full range of particle sizes exhaled: from a tenth of a micrometer to a quarter of a millimeter.

The participants performed different vocalization activities such as singing, speaking and shouting for 20 minutes in total. “Vocalization and age are shown to be independent risk factors for particle production,” reports Simone Scheithauer from the Department of Infection Control and Infectious diseases at the University Göttingen Medical Center.

The volume of the exhaled particles determines potential infection risk

Although human drops and aerosols contain mostly small particles, larger particles constitute the major part of the total volume that can contain pathogens.

“If the pathogen mainly resides in the upper respiratory tract, the large particles are by far the main transmitter of the disease,” explains Eberhard Bodenschatz, director at the Max Planck Institute for Dynamics and Self-Organization.

“It is thus important to consider the localization of the infectious particle in the respiratory tract to decide on appropriate protection,” he continues. “For example, the current Omicron variant of the Coronavirus seems to be localized more to the upper respiratory tract and this is why even simple filtering face masks are a great protection.”

In contrast, infectious diseases that reside mainly in the lungs will primarily be transmitted via small particles. Since their production increases with age, children are less likely to transmit such diseases than adults, according to the study. To prevent airborne transmission of lung diseases, wearing of well-fitted and high-efficiency facial masks can thus be an effective measure to avoid disease transmission, especially for adults.