Infants who have been sick with a common intestinal virus are more likely to be allergic to gluten later in life, a study has found.

The study, published recently in the British Medical Journal, concluded that children who suffered from "enterovirus" diseases such as conjunctivitis, aseptic meningitis and hand, foot and mouth disease before the age of three had a higher frequency of coeliac disease when they were older. 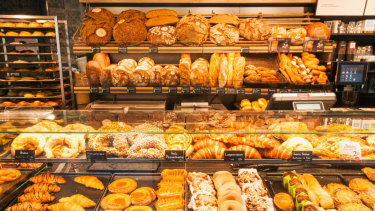 Intestinal infections as an infant could be a predictor for coeliac disease, new research suggests. Credit:Alamy

Led by the department of paediatrics at the Ostfold Hospital Trust and Norwegian Institute of Public Health in Norway, researchers worked off the hypothesis that common gastrointestinal infections in childhood could damage parts of the stomach that protected people from coeliac disease.

This has been suggested by previous studies but no certain conclusions on the link have been made just yet.

“We believe … that enterovirus causes impaired barrier function, which in turn increases the risk of coeliac disease,” the researchers wrote.

“If enterovirus is confirmed as a trigger factor, vaccination could reduce the risk of development of coeliac disease.”

Coeliac disease is a digestive condition triggered by gluten, found in wheat, barley and rye. It can cause bloating, tiredness, abdominal pain and uncomfortable or abnormal bowel movements.

Coeliac disease affects about one in 70 Australians. Children as young as six months can be diagnosed with the condition.

Some 220 Norwegian children had their stool samples tested for the common intestinal viruses regularly between three months and 36 months of age. Coeliac disease was then diagnosed by taking blood samples every three years from age three to 12.

The study found 25 children had coeliac disease by an average of 10-years-old. "Enteroviruses" was found in 17 per cent of faecal samples from those children before they developed coeliac disease.

"We found a significant association between exposure to enterovirus and subsequent risk of coeliac disease," the researchers wrote.

"Although the effect sizes are relatively small, this study suggests that infections with enterovirus in early life could be one among several key risk factors for development of a disease with lifelong consequences.

"Our observations suggest that, rather than a specific enterovirus species or type driving the association, several enterovirus types … and long-duration infections in the period after introduction of gluten were involved."

The intestinal samples were taken from children between 2001 and 2007, and then they were followed for coeliac disease until September 2016.