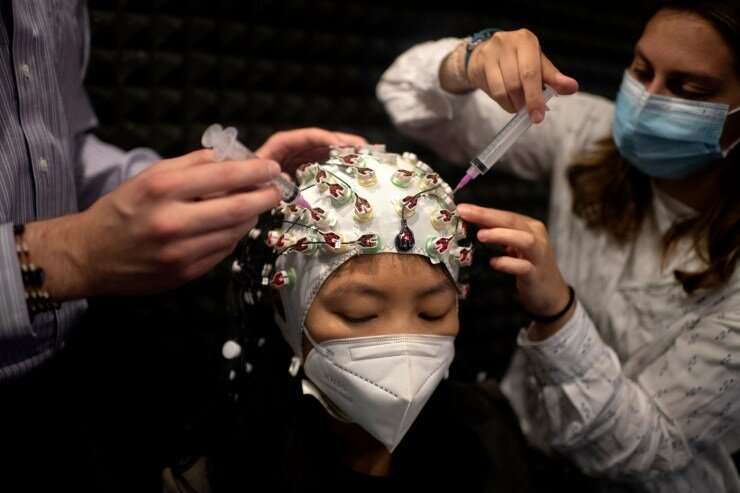 When Paul McCartney wrote “Get Back,” he never would have predicted how useful or relevant the song would become for music therapists.

The song’s refrain—”Get back to where you once belonged”—might as well be a therapist encouraging a dementia patient to recall a distant memory. In new research, Psyche Loui, an associate professor of music, is attempting to do exactly that.

Published in Scientific Reports, Loui found that for older adults who listened to some of their favorite music, including The Beatles, connectivity in the brain increased. Specifically, Loui—and her multi-disciplinary team of music therapists, neurologists and geriatric psychiatrists—discovered that music bridged the gap between the brain’s auditory system and reward system, the area that governs motivation.

“There’s something about music that is this functional connectivity between the auditory and reward system, and that’s why music is so special and able to tap into these seemingly very general cognitive functions that are suddenly very engaged in folks with dementia who are hearing music,” said Loui, who directs the Music Imaging and Neural Dynamics Lab.

The original idea for this research came out of Loui’s own experiences playing music in nursing homes. She recalled how people who couldn’t finish a sentence or thought would suddenly harmonize and sing along to a song she was playing.

“[Music] seems to engage the brain in this way that’s different than everything else,” Loui said.

The researchers had a group of older adults between the ages of 54 and 89 from the Boston area listen to a playlist for an hour every day for eight weeks and journal about their response to the music afterward. Loui and the team would scan the participants’ brains before and after listening in order to measure their neurological response.

Playlists were highly personalized and featured a combination of the participants’ self-selected songs, which ranged from The Beatles to Bruce Springsteen, and a preselected mix of classical pieces, pop and rock songs and new compositions created by Hubert Ho, an associate teaching professor of music at Northeastern. Participants would then rate each song based on how much they liked it and how familiar it was.

“The most important lesson that we learned from the music therapist was that there is no one-size-fits-all for what kind of music works best,” Loui said.

Music that was both familiar and well-liked tended to activate the auditory and reward areas more. However, the music that participants selected themselves provided an even stronger connection between these two areas of the brain.

Loui hopes this study, which is one of the first to document neurological changes from extended exposure to music-based intervention, could have a significant impact in a field that has quickly risen in prominence. The National Institute of Health is currently pushing initiatives around music therapy, and AARP’s Global Council on Brain Health recently convened a panel, which Loui served on, to examine evidence of music’s influence on brain health. The panel ultimately formed recommendations for how people ages 50 and over can incorporate music into their lives to promote mental wellness.

Music’s ability to calm older adults and people with mental illness is well-documented, Loui said; but what’s less known is how and to what extent music can help improve memory, cognition and executive function.

“That’s something we’re working on right now, and I think there might be something about the fact that music is an art that unfolds over time,” Loui said. “For example, you’re listening for a beat and then you can tap your toes to the beat. That kind of process engages the brain’s reward systems and cognitive systems in ways that might be beneficial for long-term cognitive functions.”

Moving forward, Loui hopes to extend her study to older adults who have cognitive and neurodegenerative disorders, people who might benefit even more from the effects of music therapy.