British people breathe in the equivalent of one cigarette a day because of air pollution, leading doctors warn as they beg ministers to do more to tackle the public health crisis

British people are breathing in the equivalent of one cigarette a day because of air pollution, a leading doctor has warned.

The Government is now being begged by two royal medical colleges to do more to tackle the public health crisis, which is shortening thousands of people’s lives.

Ministers are doing the bare minimum on curbing traffic fumes, they argued, distracted instead by less concerning problems such as wood stoves. 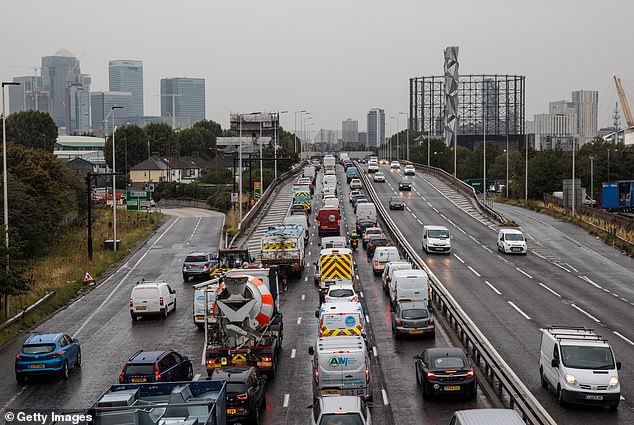 The Government are being begged by the medical experts to do more about air quality because of the sheer impact on public health. Pictured, London during rush hour

Children’s health in particular is in a state of emergency, experts say, with youngsters in the UK suffering more breathing problems than any in Europe.

But everyone from unborn babies to elderly people is being affected by the scourge, as fumes from cars and factories are pumped into the atmosphere.

Air pollution is likely to blame for around 8.8million deaths worldwide, and is linked to the shortening of 40,000 lives a year in the UK – doctors are now demanding immediate action is taken.

Professor Stephen Holgate, the Royal College of Physicians’ special adviser on air quality, said the Government are not acting on damning evidence.

He told The Times: ‘In the United Kingdom [air pollution exposure] is equivalent to every single person smoking one cigarette a day.

‘Of course since it’s affecting three to five per cent of the population in a much greater way, it would be equivalent to smoking many more cigarettes in those areas.’

And Public Health England has warned there’s strong evidence to suggest pollution can lead to heart or lung disease, stroke or cancer – and it makes asthma worse.

SO WHAT IS THE GOVERNMENT DOING TO TACKLE AIR POLLUTION?

In January 2019, Environment Secretary Michael Gove launched a new strategy to clean up the UK’s air.

The main aim is to reduce people’s exposure to particulate matter (PM), identified as one of the most damaging pollutant by the World Health Oganization, as well as other dangerous pollutants, including NO2, NOx.

Strategies include ending the sale of petrol and diesel cars and vans by 2040.

Mr Gove said the UK was going far further than every other country in the EU to tackle emissions from cars.

The sale of pollutant fuels, such as wood burning stoves and fuel for open fires such as coal, will also be prohibited by 2022.

Farmers will be required to reduce their fertiliser use and equipment that contributes to emissions.

Mr Gove said: ‘The evidence is clear: while air quality has improved significantly in recent years, air pollution continues to shorten lives, harm our children and reduce quality of life.’

Critics of the strategy said there needs to be clearer framework, details and deadlines.

Campaigners believe deadlines are too far away, and Greenpeace said the end of petrol and diesel cars should be within the next decade.

The UK is currently in breach of European safety levels for nitrogen dioxide and has been threatened by the European Commision over its longstanding failures. But after Brexit, the UK will no longer be subject to EU legislation on air pollution.

Doctors are seeing more and more children with breathing problems and making a clear link to air pollution where they live, according to experts.

Professor Jonathan Grigg, of the Royal College of Paediatrics and Child Health told The Times the impact on children is a ‘public health emergency’.

Progress is beginning on measures to cut down on how much pollution children are exposed to.

NHS watchdog the National Institute for Health and Care Excellence (NICE) in March advocated fining people who leave their cars running outside schools.

Public Health England has suggested congestion charges in cities, though it is down to local councils to put these in place themselves.

And other measures include encouraging people to drive hybrids or electric cars, and gradually phasing out new petrol and diesel vehicles.

Research by The Times found that in the most polluted postcode in Britain the air was equivalent to someone smoking 23 cigarettes per month.

While, on average, postcodes across the UK have a below global average level of air pollution, those in London were significantly higher.

Experts said the Government’s attitude must be shifted away from the idea that pollution is too difficult to handle.

They accused politicians of avoiding the real problem of traffic fumes by focusing on ‘distractions’ like encouraging people not to burn damp wood in their stoves.

This comment referred to a plan announced by Environment Secretary, Michael Gove, to restrict sales of wet wood and phase out coal for use in people’s homes.

Pressure must also be put on the public to make change, with a clear message that it would improve their quality of life, rather than make it harder, Professor Holgate said.

Campaigners at Greenpeace have challenged the government to phase out diesel and petrol fuelled cars by 2030, saying the current aim of 2040 is too far away.

The UK is currently in breach of European safety levels for nitrogen dioxide, which is primarily generated by vehicle traffic, released when fuels such as petrol are burned.

These NO2 particles can penetrate the airways and cause damaging inflammation inside the body.

The Government has pledged to improve air quality nationwide to World Health Organization standards by 2025.

It has acknowledged air pollution is one of the biggest threats to public health in the UK, behind only cancer, obesity and heart disease.

Although it insists its goals are ambitious, critics said the plans were short on detail and didn’t measure up to EU targets.