The Food and Drug Administration (FDA) is warning that breast implants could trigger a type of skin cancer as well as other cancers in the immune system.

In a safety alert issued Thursday, it said although ‘rare’ several cases had been confirmed of squamous cell carcinomas — a type of skin cancer — and several lymphomas in the scar tissue around implants.

They are now researching whether the implants did trigger these cancers, with doctors and patients being told to look out for symptoms including swelling, lumps and changes to their skin. Breast implants are already linked to a type of cancer of the immune system, although the risk of this occurring is very low.

It comes as the devices continue to surge in popularity, with research finding more than three quarters of America’s plastic surgeons are now facing higher demand. Nearly a quarter say their business has doubled. 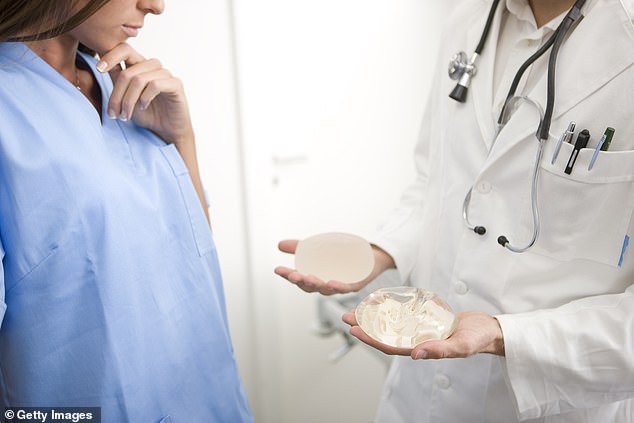 In its alert, the FDA said the cancers were not the same as Breast Implant-Associated Anaplastic Large Cell Lymphoma — a cancer already known to be triggered by implants.

It added that doctors and patients should ‘be aware’ of the risk that other cancers could also be triggered by the implants.

The FDA said people with breast implants should do the following.

The FDA added it had received 10 medical reports of SCC related to breast cancers, and 12 related to lymphomas.

In some cases, patients had had the implants for years before developing the diseases.

The cases were revealed during a standard review of reports of cancer cases in people with breast implants that had been submitted to the FDA.

More than a decade ago the FDA was the first to warn of a possible link between textured implants and a rare cancer.

It eventually led to pharmaceutical company Allergan issuing a worldwide recall of textured breast implants associated with the cancer.

But the FDA stopped short of banning the implants, noting that some women with the cancers had received smooth implants.

The cancer cases are rare, however, with about one in 3,000 to one in 30,000 women who get the implants developing it estimates suggest.

Efforts have also been mounting to keep patients informed about the health risks of getting a breast implant.

Last year new labeling was introduced, alongside a patient checklist to inform people that the implants are not medical devices that will not last a lifetime.

Doctors must walk patients through the health problems to give them the opportunity to back out of the procedure.

It comes after a survey by the American Society of Plastic Surgeons revealed last month that most are seeing a spike in demand.

It is likely being driven by Americans being more willing to spend money on the procedures they said, likely because most saved over the COVID pandemic. The work from home culture may also be allowing many more time to recover from the procedures without losing income, the survey found.