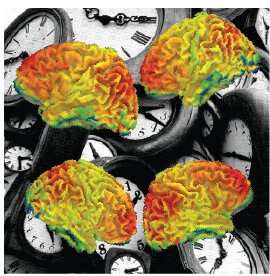 The neural ‘time windows’ in certain small brain areas contribute to the complex cognitive symptoms of autism, new research suggests. In a brain imaging study of adults, the severity of autistic symptoms was linked to how long these brain areas stored information. The differences in neural timescales may underlie features of autism like hypersensitivity and could be useful as a future diagnostic tool.

Sensory areas of the brain that receive input from the eyes, skin and muscles usually have shorter processing periods compared with higher-order areas that integrate information and control memory and decision-making. The new study, published in the journal eLife on February 5, shows that this hierarchy of intrinsic neural timescales is disrupted in autism. Atypical information processing in the brain is thought to underlie the repetitive behaviors and socio-communicational difficulties seen across the spectrum of autistic neurodevelopmental disorders (ASD), but this is one of the first indications that small-scale temporal dynamics could have an outsized effect.

Magnetic resonance imaging of the brains of high-functioning male adults with autism were compared to those of people without autism. In the resting state, both groups showed the expected pattern of longer timescales in frontal brain areas linked to executive control, and shorter timescales in sensory and motor areas. “Shorter timescales mean higher sensitivity in a particular brain region, and we found the most sensitive neural responses in those individuals with the most severe autistic symptoms,” says lead author Takamitsu Watanabe of the RIKEN Center for Brain Science. One brain area that displayed the opposite pattern was the right caudate, where the neural timescale was longer than normal, particularly in individuals with more severe repetitive, restricted behaviors. These differences in brain activity were also found in separate scans of autistic and neurotypical children.