The dramatic growth of cosmetic surgery into a multibillion-dollar industry provokes differing reactions. Proponents say patients can derive enormous benefits from using medical technology to improve their appearance. Opponents ask what it says about our society when so many people, mostly but not exclusively women, want to spend fortunes and undergo pain to conform to a particular model of beauty.

Both sides agree, however, that people who undergo cosmetic surgery should receive professional service which meets the same safety standards as other medical procedures. 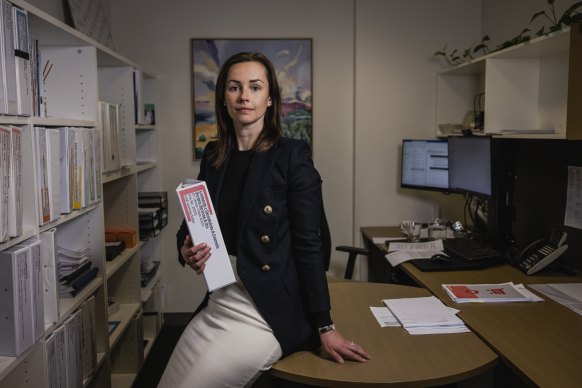 Kathryn Emeny is a lawyer with Maddens, Warrnambool, Victoria. She is running a class action on Dr Daniel Lanzer and associated doctors and has more than 540 people signed up. Credit:Nicole Cleary

Unfortunately, a series of joint investigations by The Age, 60 Minutes and Four Corners over the past 10 months have documented scores of cases where people have suffered horrific disfigurement, long-term pain and even life-threatening complications after cosmetic procedures.

In a report in today’s paper, The Age describes the case of a retired elite soldier who went in to have a gynecomastia, or removal of man boobs, and liposuction. His right nipple fell off. When he went back for revision surgery, he told the doctor “please don’t kill me”. Even though he suffered serious complications and blood loss, he was sent to a local motel rather than a hospital to recover.

In another case, a 24-year-old woman was admitted to intensive care with septic shock after an operation known as a “Brazilian butt lift” went horribly wrong.

Unfortunately, these abuses keep happening and regulators have failed to respond.

One fundamental problem is the lack of rules on what qualifications are required to practise cosmetic surgery. Currently, many GPs with no formal training offer the service.

Moreover, different state and federal regulators often pass the buck for who should take action on complaints and take far too long to respond.

In some cases, doctors who have left patients with terrible injuries have been given nothing more than a rap on the knuckles. Even when they are banned from performing cosmetic surgery, disgraced doctors are allowed to consider working as GPs.

Part of the reason for the weak regulation is the intimidating legal and financial power of the cosmetic surgery industry.

Some surgeons use tactics such as threats and payouts to silence patients who make complaints and have successfully challenged decisions by the regulators in the Administrative Appeals Tribunal.

Already 540 people have indicated they could join a class action which has been launched in the Victorian Supreme Court against cosmetic surgery clinics operated by Daniel Lanzer.

The threat of these sorts of damages claims could eventually force cosmetic surgeons to lift their game or get out of the business, but new wrongdoers keep popping up as authorities play whack-a-mole. Court action of this nature will take far too long, and in the meantime more patients will suffer unnecessarily.

Some are calling for a royal commission. For now, the AHPRA and the Medical Board of Australia in November commissioned an independent inquiry by former Queensland Health Ombudsman, Andrew Brown, into the sector which is expected to report soon.

It has been given very broad terms of references which should allow it to make strong recommendations. Hopefully, it will give governments a blueprint to do what they must, and end the mess.

The Morning Edition newsletter is our guide to the day’s most important and interesting stories, analysis and insights. Sign up here.

Most Viewed in Lifestyle