A study found overindulging in alcohol as a teen alters the expression of the protein BDNF, which controls fear and anxiety in the grey matter of the brain.

When the scientists analysed the brain tissue of more than 40 deceased patients, they found those who binged as teenagers had up to 40 per cent less BDNF.

‘BDNF is needed for normal development in the brain and for connections to form between neurons,’ the researchers claim.

Changing this protein’s expression may increase an adolescent’s risk of psychological problems – and alcoholism – as an adult, they add. 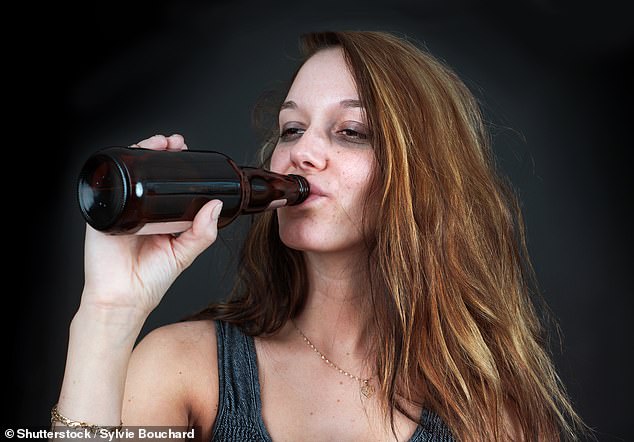 The research was carried out by Illinois University and led by Professor Subhash Pandey, director of the Center for Alcohol Research in Epigenetics.

Binge drinking is generally defined as consuming more than six units of alcohol in one session. This is the equivalent of around two-to-three glasses of wine or beer.

Last year, teenage girls in England, Scotland and Wales made up three of the top six spots in a World Health Organization league table of binge drinking across 36 European nations.

And in the US, one in six adults binge drinks around four times a month, with the habit being most common in those aged 18-to-34, according to the Center for Disease Control and Prevention.

To determine alcohol’s effect on the brain, the scientists analysed the postmortem results of 44 people who died in their mid-to-late fifties in Sydney.

Of the deceased, 11 were heavy drinkers as teenagers, 11 binged in later life and the remaining 22 had no history of alcohol abuse.

A World Health Organization (WHO) report found excessive drinking is associated with an increase in domestic abuse, particularly men towards women.

The abuse can be physical, such as beating; psychological, like constant belittling; forced sexual intercourse; or controlling behaviour, such as isolating a person from their loved ones.

According to the WHO, this abuse may be caused by the belief that alcohol causes violent behaviour and therefore drunk people use this as an excuse.

In Australia, restricting the hours alcohol was in sale in one town reduced the number of booze-related domestic violence cases that ended up in hospital.

A coupon-based alcohol rationing system in Greenland in the 1980s, which entitled adults to 72-beers worth of booze a month, led to a 58 per cent reduction in police call outs for domestic abuse.

Those in problem relationships may drink to help themselves cope, however, this combined with pre-existing issues may cause abusive behaviour, the report states.

While abuse can cause physical injury, including miscarriages in pregnant women, it is also linked to emotional problems like suicidal thoughts and depression.

The WHO believes reducing social tolerance towards excessive drinking, along with the expectation of men to act masculine, may help to combat abuse.

Results – published in the journal Translational Psychiatry – revealed the brains of those who drank excessively as teenagers had between 30 and 40 per cent less BDNF.

BDNF promotes the survival of neurons by playing a role in the growth, maturation and maintenance of these nerve cells.

The protein is found in the amygdala, which detects fear and prepares the body for emergencies.

Damage to this almond-sized brain region has been linked to depression and post traumatic stress disorder (PTSD).

‘BDNF is needed for normal development in the brain and for connections to form between neurons,’ Professor Pandey said.

‘If levels are lowered due to alcohol exposure then the brain will not develop normally.’

The results further revealed the amygdala of the young drinkers had about 30 per cent more of a molecule called BDNF-AS.

This regulates the gene that produces BDNF, with more BDNF-AS leading to less BDNF, according to Professor Pandey.

Alcohol is thought to lead to epigenetic changes – when environmental factors influence a person’s DNA – but only in those who drink under the age of 21.

This particular epigenetic process involved a chemical being added to another molecule, resulting in a change in gene expression.

‘The epigenetic changes we saw in the amygdala of early-onset drinkers can alter the normal function of the amygdala, which helps regulate our emotions,’ Professor Pandey said.

‘[It] may cause individuals to be more susceptible for things like anxiety, which we have shown in other studies, or the development and maintenance of alcohol-use disorder later in life.’

This comes after the same researchers exposed rats to intermittent alcohol doses during their ‘teenage years’ in a study released four years ago.

These rodents then became more prone to anxiety in later life and were attracted to alcohol more than other animals.