‘He was half the size of the teddy bears around him’: Palm-sized baby who weighed just 1lb 9oz when he was born FOUR months premature defies the odds to survive

A baby who weighed a tiny 1lb 9oz after being born at just 24 weeks and three days is finally home.

River Willis arrived on July 27 last year via emergency C-section after his mother Cara Willis’ placenta came away from the wall of her womb – putting both their lives at risk.

The newborn gradually grew stronger, until he was struck by sepsis at three weeks old, which left his face so swollen Mrs Willis, 24, did not recognise her own son.

Doctors even warned they would have to withdraw treatment if he failed to improve.

After pulling through, River spent three-and-a-half months at University Hospital of Wales, Cardiff, before being transferred to Prince Charles Hospital in Merthyr Tydfil – far closer to the family’s home in Tredegar.

It was not until he was five months old that the youngster was finally able to go home, with him still requiring oxygen ahead of open-heart surgery in October. 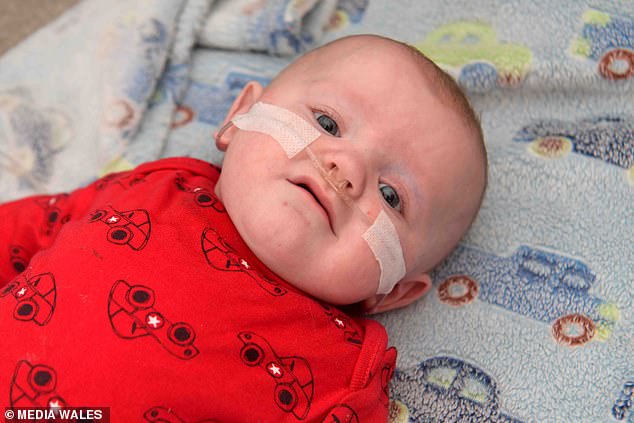 River Willis (pictured recently, aged seven months) spent the first five months of his life in hospital after he was born four months premature on July 27 last year. He also endured sepsis at three weeks. Although home, he requires oxygen ahead of open-heart surgery in October 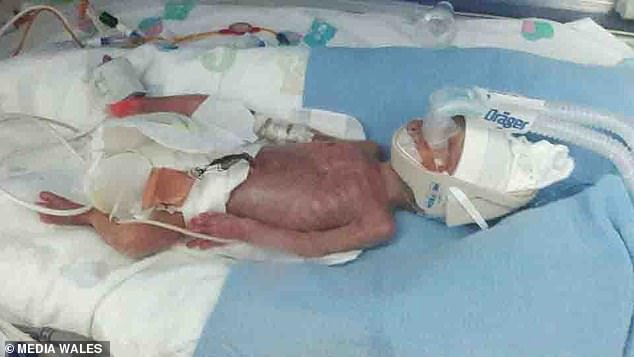 Pictured as a newborn at University Hospital of Wales, Cardiff,, River weighed a tiny 1lb 9oz and could ‘fit into the size of your hand’. His parents claim he was so small you almost missed him when nurses pulled back his blankets and he was half the size of the teddy bears in his bed

Doctors were forced to carry out an emergency C-section four months ahead of River’s due date when Mrs Willis endured a placenta abruption.

This caused such severe bleeding it ‘turned the hospital bed red’, she claims.

Placenta abruption affects up to one per cent of pregnancies and increases the risk a baby will be born premature or with complications.

The mother-of-four said: ‘They had to put me to sleep in order to deliver the baby.

‘When I woke up I didn’t know if my son would be alive or dead.

‘As I’d been given a high dose of morphine I was really struggling to speak.

‘I kept on trying to ask if the baby was okay. I didn’t know his weight, his condition or what he looked like.

‘I wanted updates but they weren’t telling me too much.’

After a seven-hour wait, which Mrs Willis describes as the worst time of her life, a nurse brought her and her husband Luke a picture of their son.

‘It was lovely,’ Mrs Willis said. ‘He was so early that his skin was still see-through.

‘He also had a big bag over him to keep him warm and loads of wires around him.’

But it would be another two days before the couple could see their baby for the first time.

‘They lifted up the blankets around him and he was so small you could hardly see him,’ Mrs Willis said. ‘We both cried.

‘He was about half the size of the little teddy bears around him.

‘You could literally fit him into the palm of your hand, but we couldn’t hold him for two weeks.’ 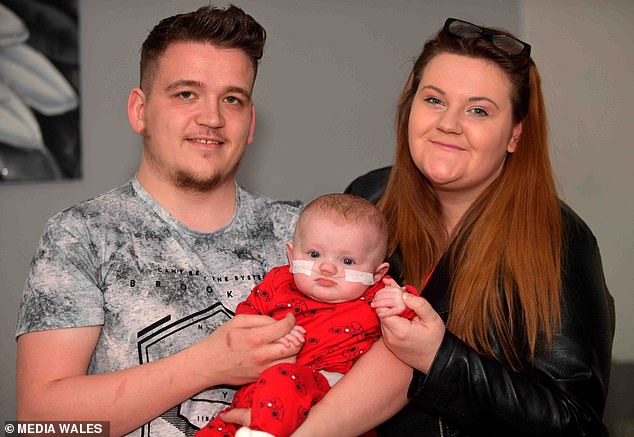 Doctors and nurses reassured the parents River’s chances of survival grew with every passing hour.

And for the next three weeks he made promising progress despite his weight dropping to 1lb at one stage.

Although thrilled her son was on the mend, it was a difficult time for Mrs Willis.

‘He was so premature my milk hadn’t come in yet which meant I couldn’t express,’ she said.

‘Not being able to feed my own child was heartbreaking. He ended up getting his milk from a donor mum.

‘It felt wrong, but all that mattered was River getting stronger.’ 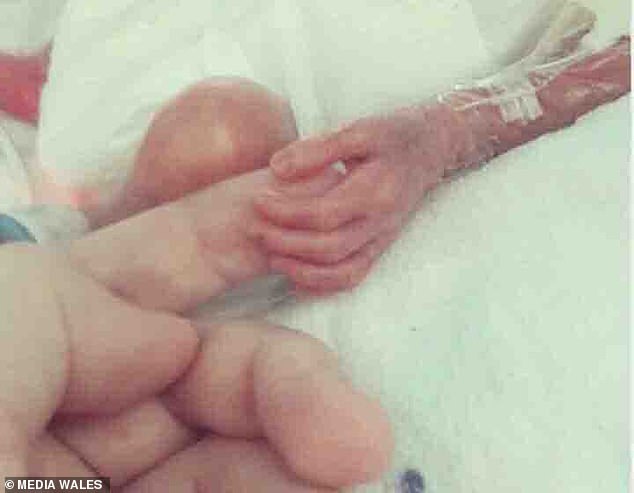 As a newborn, River’s hand could not even grasp the tip of his parents’ fingers (pictured). After getting stronger over the first few weeks, the youngster was struck by sepsis that left his face so swollen his mother did not recognise him. Doctors even threatened to withdraw treatment

But things took a dramatic turn for the worse when River suddenly contracted sepsis, which occurs as a complication of an infection.

‘When he had sepsis I didn’t recognise him as his face was so swollen,’ Mrs Willis said.

‘I actually thought I was looking at a different baby in the incubator.’

Doctors warned the parents River may not make it through but, once again, the newborn defied expectations.

‘They said if he didn’t get any better then we would have to have a chat about withdrawing his treatment,’ Mrs Willis said.

‘He was quite bad for a week but he did get better.’

While worried sick about their son, the couple had three children at home to look after.

‘For weeks neither of us slept because we were worried about receiving a call that River had taken a turn for the worse,’ Mrs Willis said.

‘I think the other children probably helped me as they kept me so busy.

‘If I’d been a first-time parent I would have spent time at home just worrying and that would have been horrendous.’ 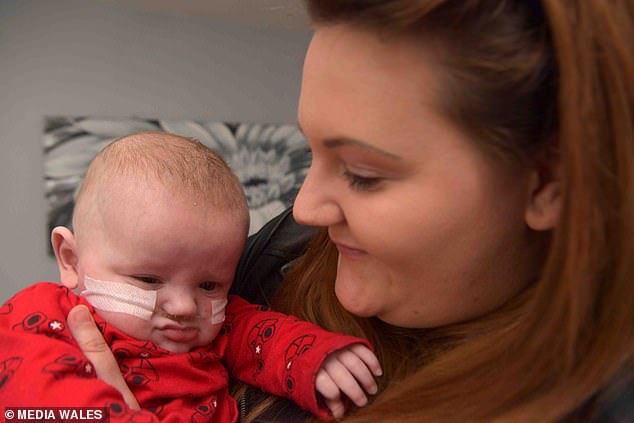 Mrs Willis is thrilled to have River home but describes the ordeal as the toughest time she has ever faced. Doctors were forced to carry out an emergency C-section when her placenta separated from the wall of her womb, putting both herself and her baby at risk of death

‘We got really close to the staff in UHW, so it was really sad to leave them,’ Mrs Willis said.

‘They not only saved River’s life, but they saved mine too.

‘I’m so immensely grateful for what they have done for us.’

While River was being cared for at Prince Charles, his parents were trained in how to give CPR and how to manage his oxygen machine.

‘If anything goes wrong it’s now down to us,’ Mrs Willis said.

River was finally discharged at five months old, which came with mixed emotions.

‘We should have been excited to get him home, but as the hospital staff had been so amazing we were a little scared to be separated from them,’ Mrs Willis said.

But despite her fears, River has settled into family life well.

‘He adores his older brothers and sister, and it’s so amazing to think how much he’s progressed,’ Mrs Willis said.

‘We’re hoping he’ll have open heart surgery in Bristol around October time, but until then he’ll still need oxygen.’

Tests have also revealed River has a hole in his heart and will need another operation in the future.

WHAT IS A PREMATURE BIRTH, AND WHAT ARE THE RISKS TO BABIES?

Around 10 per cent of all pregnancies worldwide result in premature labour – defined as a delivery before 37 weeks.

When this happens, not all of the baby’s organs, including the heart and lungs, will have developed. They can also be underweight and smaller.

Tommy’s, a charity in the UK, says this can mean preemies ‘are not ready for life outside the womb’.

Premature birth is the largest cause of neonatal mortality in the US and the UK, according to figures.

Babies born early account for around 1,500 deaths each year in the UK. In the US, premature birth and its complications account for 17 per cent of infant deaths.

Babies born prematurely are often whisked away to neonatal intensive care units, where they are looked after around-the-clock.

What are the chances of survival?