Babies born in the autumn and winter may face a higher risk of depression later in life, research suggests.

Scientists found mothers who gave birth in those two seasons had higher levels of the ‘stress hormone’ cortisol in their saliva.

Experts said evidence shows too much of the hormone in pregnancy raises the risk of the baby developing psychiatric disorders later in life.

The findings may explain why people whose birthdays fall in winter are more likely to have schizophrenia, the researchers claim. 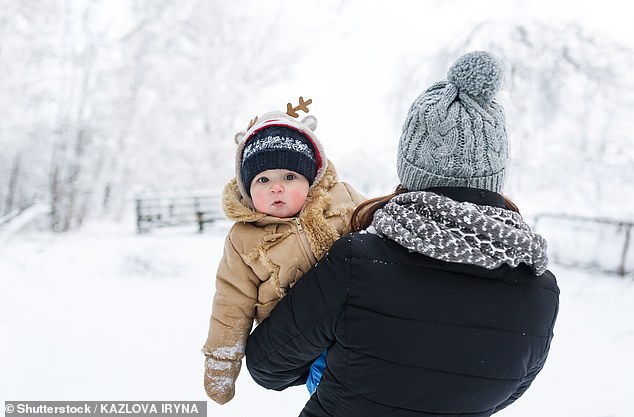 Babies born in the autumn and winter could become depressed later in life because their mothers have more of the ‘stress hormone’, scientists have said

Researchers at Cardiff University said the study is the first to report the effects of the seasons on maternal salivary cortisol levels in late pregnancy.

Each of the women provided saliva samples during their pregnancy and filled out questionnaires to assess their level of depression and anxiety.

Cortisol levels dropped by 0.05μg/dL and 0.06μg/dL, on average, in the spring and summer months, according to the findings.

The researchers said this means babies born in autumn and winter are exposed to particularly high levels of cortisol just before they are born.

WHAT IS THE ‘STRESS HORMONE’ CORTISOL?

Cortisol helps the body respond to stress as well as regulating a wide range of vital processes throughout the body, including metabolism and the immune response.

It’s made in the adrenal glands, located atop the kidneys, and then released into the blood, which transports it all round the body.

Almost every cell in the body contains receptors for cortisol and so cortisol can have lots of different actions.

These effects include controlling the body’s blood sugar levels, acting as an anti-inflammatory, influencing memory formation, controlling salt and water balance, influencing blood pressure and helping development of the foetus.

When you encounter a perceived threat your hypothalamus, a tiny region at your brain’s base, prompts your adrenal glands to release a surge of hormones, including adrenaline and cortisol.

Cortisol curbs functions that would get in the way of the fight-or-flight response. These might include your digestive or reproductive systems, your immune system, or even your growth processes.

When the threat is gone, cortisol and adrenaline levels should return to normal.

Research has found a link between raised or impaired regulation of cortisol levels and a number of psychiatric conditions such as anxiety and depression. However, the significance of this is not yet clearly understood.

Professor Rosalind John was the senior author of the study, which was published in the journal Psychoneuroendocrinology.

She said: ‘High levels of cortisol in pregnant women have previously been associated with a higher risk of children developing mental health disorders.

‘The new findings could explain why these disorders are more common in people born during the winter months.’

Cortisol is produced by the adrenal glands, and is often termed a stress hormone because it increases when a threat is perceived.

In pregnancy, cortisol levels are known to naturally increase, and generally levels of cortisol vary between people due to factors including age, gender and ethnicity.

Professor John said the results do not explain why women who give birth in winter or autumn have these higher levels of cortisol.

The effects of seasons and weather on mood are complicated and not well understood, but exposure to less sunlight in darker months is thought to be linked to lower mood.

For people with seasonal affective disorder (SAD), for example, the NHS suggests that being deprived of sunlight disrupts the production of melatonin and serotonin.

These hormones control sleepiness and feelings of depression and reduced daylight hours may affect their production in the hypothalamus region of the brain.

The authors said adverse environmental exposures during the pregnancy can have an effect on the health of the baby as they grow older.

For instance, they said it could increase the risk of developing a mental health illness later in life, or conditions such as type 2 diabetes.

Further studies to explore the link between seasons and cortisol level are needed because the impact is ‘relatively unexplored’, the authors added.

The study found no link between the season during which babies were born and the mental health of the mothers.

The findings ‘may offer an explanation for research demonstrating that season of birth influences the risk of developing other conditions later in life.’

For example, schizophrenia prevalence is highest in those born in January and February, the researchers said. These children are exposed in utero to the highest levels of cortisol.

The new results contrast those from a 2015 study, which found higher cortisol levels in the summer and autumn and the lowest in winter.

That study used hair samples to measure cortisol in pregnant women – hair can be influenced by other factors such as temperature and light.

The results follow another study in June that found pregnant women who don’t get enough sunshine are more likely to have children with dyslexia, autism or ADHD.

Researchers at Glasgow University found 21 per cent of children conceived during the winter months of February, March and April had a learning disability. In contrast, the figure was just 16.5 per cent for youngsters conceived in June and July.