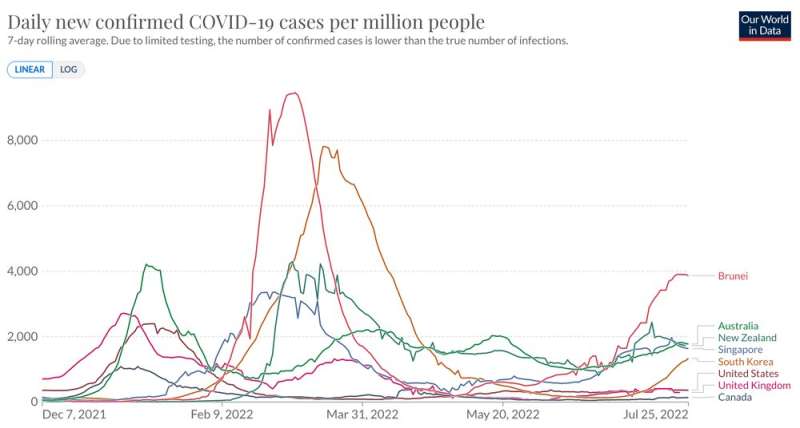 Australia’s elimination strategy during the first two years of the COVID pandemic was one of the most effective in the world. Through a combination of early border closures, widespread testing and meticulous contact tracing, localized lockdowns and mask mandates, the number of reported cases was kept to around 28,000 in 2020.

This compared with 805,000 in 2020 in the Netherlands, which has a population nine million fewer than Australia.

In 2021, Australia recorded 402,000 cases. The increase was largely due to the delta outbreak in the second half of the year.

Fast forward to mid-2022, when Australia has leapt in rank to 15th in the world for total cases over the course of the pandemic—well ahead of countries with a similar population, such as Taiwan and Chile, and larger countries, such as Canada, Mexico and Iran.

The situation has changed dramatically this year. While Australia has reported 9,225,519 cases since early 2020, 96% have been this year. This has led to Australia’s global ranking of cases, hospitalizations and deaths being among the highest in the world.

The seven-day average of new daily cases is currently just under 47,000, which is lower than the peak of 103,000 in mid-January.

Somewhat surprisingly, the number of COVID patients in hospital (5,359) is the highest since the pandemic began.

However, the number of infected persons admitted to an ICU is well below the January peak.

This may be due to higher vaccination rates than at the beginning of the year and the availability of antiviral drugs, resulting in fewer hospital cases with very severe illness. Though it’s worth noting aged care residents have been highly affected and many never made it to ICU despite severe illness.

Why is the ratio of cases to hospitalizations so high?

It’s possible that case numbers have been underestimated. A recent Conversation piece provided a number of reasons why this might be the case.

It’s also possible that BA.5 is more virulent than its omicron predecessors, perhaps because it targets the lungs, or simply because it is more distantly related to ancestral SARS-Cov-2 and so better at immune escape than its predecessors. This might explain the high number of deaths in residential aged care facilities.

The seven-day average of daily deaths (72) has doubled since mid-May.

Recent data from Victoria revealed those who had not received a third vaccine dose made up 72% of those who died with, or due to, COVID.

Boosters may not prevent infection but they are essential to prevent severe illness and death, especially among the elderly. And they may reduce the incidence of long COVID.

How does Australia rank globally?

Over the past week, Australia has ranked second in the world for reported cases per million, behind Brunei and ahead of New Zealand, Singapore and South Korea, excluding small island states.

It’s worth noting all five of these countries had effective responses to the pandemic in its first two years.

Fewer than 40 countries provide up-to-date figures on COVID hospital admissions; among them, Australia ranks second. The current Australian COVID hospitalization rate of 21 per 100,000 compares to 30 in France, 19 in Italy, 14 in Canada and Japan, 11 in the United States, and three in Malaysia.

Up until July 26, 11,285 Australians have lost their lives with COVID; 80% of those deaths occurred in 2022. Australia ranks second for deaths per capita behind New Zealand and ahead of Croatia, Taiwan and Spain.

Why does Australia rank so poorly on key COVID indicators? 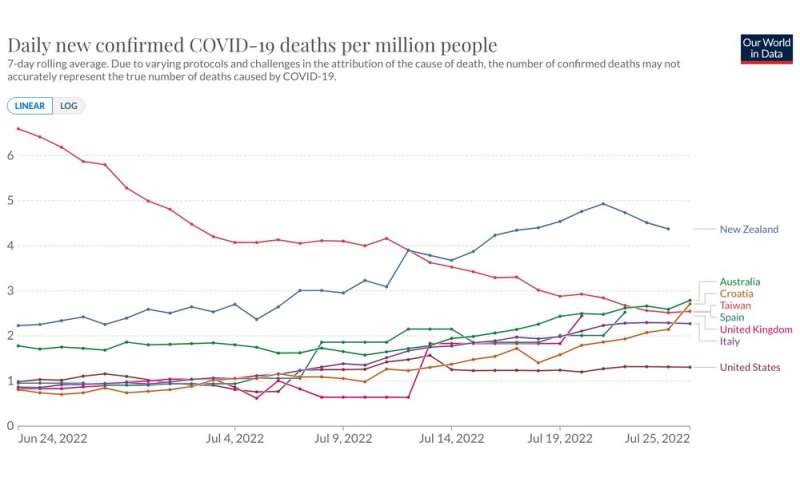 It’s tempting to explain the current COVID situation in Australia by the relatively low exposure to the virus by the population in the first two years of the pandemic.

A study of SARS-CoV-2 (the virus that causes COVID) antibodies by the United Kingdom Office for National Statistics found 71% of people in England had been infected by the end of February 2022.

A similar study in the United States found 58% of Americans had been infected during the same period.

By contrast, a study by the Kirby Institute found just 17% of Australians had been infected by the virus up until the end of February. A more recent survey in June found that this figure had jumped to 46% but it’s still lower than the U.S. and U.K.

While low population immunity may partially explain the omicron wave in Australia in January 2022, it doesn’t explain the spike in July by omicron sub-variants that have been shown to evade the immunity acquired from previous infections.

Right now, it’s summer in the northern hemisphere and winter here. That may partially explain the high case rates in Australia and New Zealand but not in Brunei, South Korea and Singapore.

Just over 70% of eligible Australians have received a third dose of a COVID vaccine. This leaves around 5.7 million adult Australians unprotected against the omicron variant.

When measured as a proportion of the entire population, Australia’s third dose booster rate ranks 35th in the world.

But this doesn’t explain the high case rates in South Korea, Singapore and New Zealand, which all have much higher booster rates than Australia.

Masks and other measures

A review of mask mandates reveals very little difference between Australia and the rest of the world.

Most countries still mandate masks on public transport and health care and aged care facilities, while universal mask mandates remain in China and in some indoor settings in South Korea.

It is difficult to find reliable data on compliance. However, anecdotally, mask compliance is much higher in countries like Japan and Italy than Australia.

No one reason for Australia’s poor ranking

It’s hard to identify a single reason why Australia’s key COVID indicators rank so poorly. It’s probably a combination of low population immunity via a combination of low vaccine booster rates and less natural exposure than other countries (noting that less infection is a very good thing overall), and the relaxation of almost all mitigation measures and seasonal factors.

However, overall it reflects the narrative by political leaders since the beginning of the year that the pandemic is in the past tense. That has profoundly affected the attitudes and behaviors of the public.

Given the current effective reproductive rate is a little over 1, it just needs to get below 1 to halt the spread of the virus.