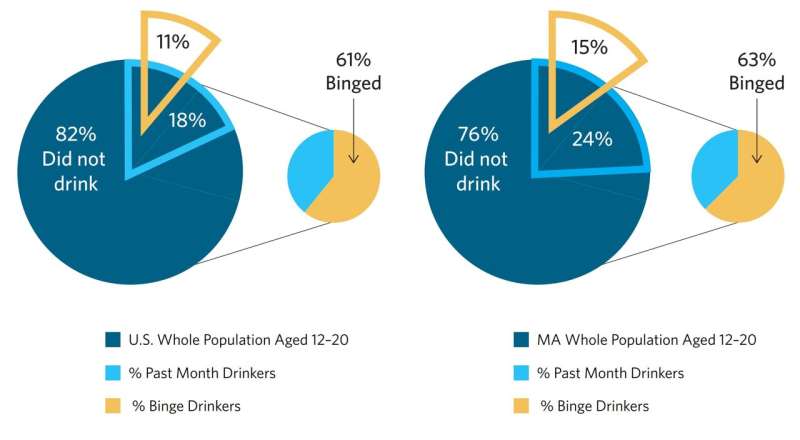 According to data from the Centers for Disease Control and Prevention (CDC), alcohol kills on average 2,760 people per year. The leading causes include 641 poisoning deaths, 350 deaths from alcoholic liver disease, 294 deaths from cancers attributable to alcohol use, and 211 liver cirrhosis deaths.

Alcohol’s toll in terms of death and disability rose by 13.8% from 2009 to 2019—faster than lung cancer, diabetes, hypertension, dietary risks or tobacco use. During the pandemic, nearly two in five (38%) of Massachusetts adults reported they increased their drinking, while nationwide, deaths involving alcohol increased by 25.5% from 2019 to 2020.

Meanwhile, the state’s alcohol taxes have lost 72% of their value in real dollars since they were last raised, and now amount to less than a nickel per drink. The CDC estimated that alcohol problems cost the state $5.6 billion in 2010, the last year for which an estimate is available. Of that, $2.26 billion (or $345 per person and $.77 per drink consumed) was paid directly by governments.

“Alcohol is clearly not paying its way in the Bay State,” said Rep. Kay Khan (D-11th Middlesex District), in response to the report. Rep. Khan has repeatedly introduced bills in the legislature to increase the state’s alcohol tax. “Our taxes on alcohol are far out of date, while alcohol problems have continued to increase.”

Massachusetts has a reputation for strict alcohol policies and high taxes, but according to the report, this is inaccurate. While Bay State drinkers consume and binge drink more than the national average, the state’s alcohol policies rank 17th in restrictiveness among the 50 states, and they have fallen behind other states in moving in more restrictive directions.

Massachusetts has five times as many licenses for bars and restaurants as are permitted in New Jersey and Pennsylvania. Of 16 states that set quotas on retail alcohol outlets, just three—Montana, South Dakota and Washington State—are more generous with these licenses than the Bay State.

And the state’s taxes on beer and wine are the lowest of the New England states, while its tax on distilled spirits is lower than all its neighbors except New Hampshire, which sells spirits at a discount in its state-run stores.

“In Massachusetts, alcohol policies are mostly discussed from a business point of view,” said David Jernigan, lead author of the report and a professor of health law, policy and management at BUSPH. “Health and safety data tell a different alcohol story, and need to be part of the policy debate.”

Binge drinking—consuming four or more drinks for females or five or more for males within two hours—is the most common and costly pattern of excessive alcohol use in the U.S., according to the CDC. In Massachusetts, binge drinking is common among both in the general population and among underage drinkers: 44% of current (past-30 day) drinkers age 12 and above, and 63% of current underage drinkers (ages 12-20) binged in the past month.