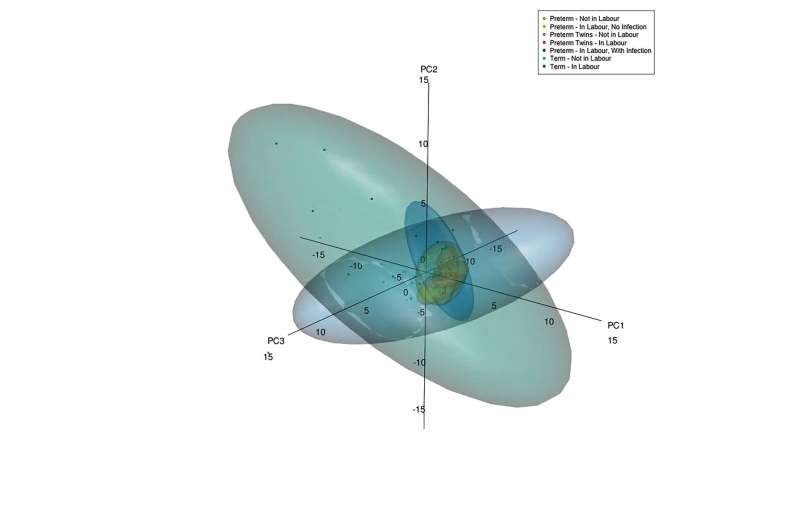 A team of researchers from the Hunter Medical Research Institute (HMRI) and the University of Newcastle has discovered the process of labor during preterm birth is different from that of full-term birth. In a paper recently published in the prestigious American Journal of Obstetrics and Gynecology, the research team discovered a distinct difference in the gene expression in women who underwent preterm labor.

It is well-known the onset of full-term labor involves changes in the expression of genes in the muscular layer of the uterus, known as the myometrium. These changes in gene expression change the uterus from a relaxed to a contracting state, ushering in labor and the baby’s delivery.

Paper author and leader of HMRI’s Mothers and Babies Research Centre, Distinguished Laureate Professor Roger Smith, said it had been a long-standing question in the field whether preterm labor shared the same gene expression profiles as term labor.

“This research shows that the mechanisms of preterm labor are distinct from those of normal term labor,” Professor Smith said.

“This provides a potential answer to why treatments to delay preterm labor are not very effective.”

To answer this question, the research team approached women undergoing cesarean section, requesting permission to collect a small sample of the muscle of the uterus during the operation. The team collected samples of muscle from seven different groups of women. These included groups who had single and twin births. Within those groups were women at term and in labor; at term and not in labor, preterm and in labor; preterm and not in labor. The team also collected samples from women suffering from an infection of the uterus called chorioamnionitis, a type of bacterial infection implicated in some preterm births.

After extracting RNA, from the samples, the team analyzed the expression of 44 candidate genes known to play a role in human labor. Gene expression analysis via RNA sampling is a method for determining which of the many thousands of genes in a cell are active, at that time, in producing proteins or in modulating cellular processes. Using computational analysis by statistician Carol Wang, the team discovered the preterm myometrium gene expression differed from the term labor and term not-in-labor groups. This change was irrespective of whether the preterm group was in labor or not, whether they were single or twin births and whether they were suffering from chorioamnionitis.

Professor Craig Pennell, a Maternal Fetal Medicine subspecialist said these results were exciting because they provided a new direction for the study of preterm labor.

“These results suggest there may be different myometrial pathways responsible for preterm labor or that the causes of preterm labor may in fact reside outside the myometrium in the cervix or fetal membranes,” Professor Pennell said.

“New treatments will need to not only relax the muscle of the uterus but also treat the cervix and the membranes around the baby.”

Lead author Dr. Jason Phung, who collected the samples and performed the laboratory work, said it was an exciting discovery as it narrowed the search for potential treatments.

“Now that we have this data, we can refocus our efforts towards finding an effective treatment to prevent babies being born too early,” Dr. Phung said.